Join fellow Canadians from sea to sea to sea on July 1, 2017, by watching the sun cross the meridian through Province House, the birthplace of Canada.

"The story of Canada as a confederation began in this historic Charlottetown building. In September 1864, Province House was the scene of the first conference on colonial union. Delegates from the colonies of Prince Edward Island, New Brunswick, Nova Scotia, and Canada met in the legislative council chamber to begin discussions, which led to confederation in 1867." (Source: Parks Canada)

Province House, a National Historic Site operated by Parks Canada, is the official birthplace of Canada.  Province House is a Charlottetown landmark.
On July 1, 2017, Canada celebrates its 150th birthday.  At 1:16 PM Atlantic Daylight Time, the sun passes directly over Province House - more specifically, the sun crosses the meridian that runs through it.  Solar Noon.  High Noon.  A spotlight shining over Canada's birthplace that can be seen by Canadians from sea to sea to sea.
Join other Canadians celebrating Canada 150 by observing the sun for a moment as it lines up with Province House.  Let this moment unite us all.
Below are the local times in each of Canada's time zones at which to observe the sun as it crosses the meridian that runs through Province House on July 1st, 2017.
Take a moment, have a peek, and know that the sun is marking the spot of Canada's birth. 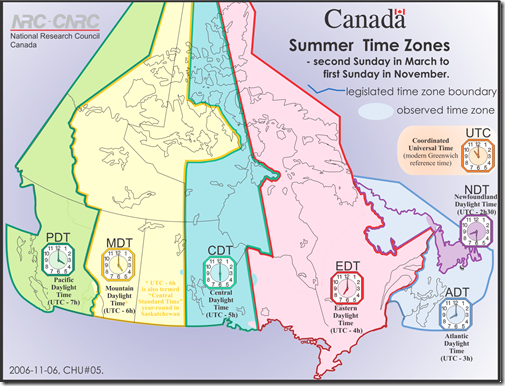