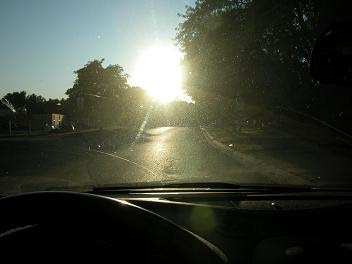 Look, we're not complaining, at least we shouldn't be. We've gone WEEKS without seeing hide nor hair of our big yellow fireball in the sky, but let's face it, depending on your commute direction, sun glare can be a real problem.

"The definition of sun glare is brightness from the sun that affects your ability to see when you're driving." explains Ralph Bouwmeester, a principal at R. Bouwmeester and Associates, a Canadian firm that specializes sun and shadow position modeling for urban planning.

He also says departments of transportation have options to help.

"Based on accident records and finding out that people couldn't see and it was attributed to sun glare, [some Departments of Transportation] have actually installed signage; warning signs to be aware of the potential for sun glare coming up. And it may be for a period of a few weeks in October or March."

There are even a few things car manufacturers can do to help, like change up the materials of our dashboards.

"People like to get their polish out and clean the dashboard and shine it up. And really that's one of the worst things you can do because the sun will reflect off of the dashboard and make things worse." says Bouwmeester.

Ideally, the best type of dashboard would be one made with black felt, where nothing will reflect and it's a dark color.

"But to keep the shine down is, I guess, a recommendation I would make. To not use those kinds of cleaning products on your dashboard." Bouwmeester says.

But outside of making sweeping changes to car designs, there are other things you can do to help deal with sun glare.

"I think that every driver should be equipped with a pair of polarized sunglasses. The polarized lens actually is going to decrease the intensity of the source of the glare because it's a tinted lens, so it's blocking some of that intense light. And then also the polarized lens eliminates glare off of reflective surfaces.  I think some of the biggest tips you can give people is just making sure that their windshields are clean. I mean if you look at what the first thing the light is actually hitting before it gets to your eyes is that plane of glass. So if that windshield is not an optically clean surface, you're going to have a lot of issues with the glare because all the build up and dirt, grime and debris on that windshield do act as sources of light scatter and increase the amount of glare that you're experiencing." explains Dr. Justin Bazan, medical advisor to the Vision Council.

So let's recap:
1) Grab your sunglasses
2) Don't shine your dashboard
3) Use the blue juice to keep your windshield clean.

Dr. Bazan also says, "It's usually about the time of day and the activities we're doing. So we know that sun that's directly in the visual access close to the horizon, such as in the early morning hours and then later on in the day, is going to be the most debilitating, so the sun that's directly in your line of sight."

So maybe shifting your departure time by say 15 minutes might be enough to help ward off the blinding effects of the sun.