Torontohenge is the name given for the phenomenon that occurs when the sun rises or sets in line with Toronto's major east-west streets downtown, giving photographers a great opportunity to capture the sun as it perches on the horizon between the canyon walls of buildings on either side of the street. 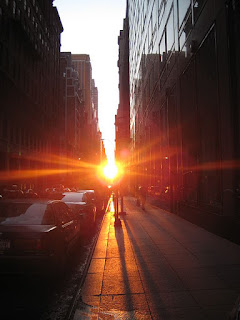 Although Torontohenge technically falls on the dates given below for 2016, great photos can be taken for about a week before the August and October dates and a week after the February and April dates as the sun hovers directly above the street.  Not great for driving, but quite a sight just the same.

The Torontohenge dates for 2016 are: